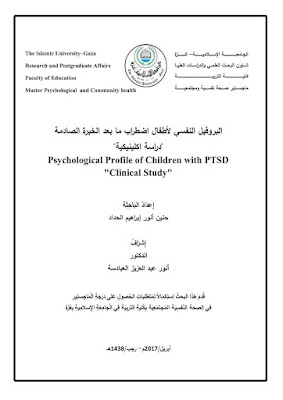 
This study aimed to investigate the personal distinctive features ofPost-Traumatic Stress Disorder (PTSD) children and compare them with ordinary children. It also aimed to identify the most prominent overt and covert psychological needs among the sample membersand the most prominent defense mechanisms used by the children. In addition, the study investigated the most prominent psychological conflicts among PTSD children, their perception of the environment, the role of the superego in the formation of the psychological conflict and the role of the superego in its adaptive attempts with reality. To collect the data, the researcher used a set of tools represented in: the directed interview and case study (prepared by the researcher), the Arabicized scale of children’s psychological reactions resulting from traumatic situations (translated and codified by Thabet 2016 ),cognitive analytic therapy (C.A.T.) test for children (prepared by Ernst Chris), thematic apperception test (T.A.T.) for adults (prepared by Henry Moray), and the tree-drawing test (prepared by Koch). The study sample consisted of (14) boys and girls distributed into two groups from normal children and children with PTSD, distributed equally between males and females and aged from 8 to 12 years. The researcher used the qualitative clinical analytical-descriptive approach. The study came up with a number of findings, the most important of which included: - There were no personality features distinguishing children with PTSD from other normal children. - There were common features among children with PTSD and ordinary children manifested in the following: The most prominent psychological needs were the need for independence, the need for avoiding harm and humiliation, the need for help and appeal, the need for control. The most prominent psychological defensive tricks used were inhibition, justification, projection, partial inhibition, reverse configuration, and setback. The most prominent psychological conflicts were manifested in independence and achievement in return for avoiding harm and humiliation, tranquility in return for discharging tension, independence, control and achievement in return for rebelling against authority. The most prominent fears that emerged were: fear of loneliness and failure, fear of pain and lack of hope, and fear of not satisfying needs. The superego was tough trying to force the ego to adapt to the situation imposed on it in most stories. The ego was often unresponsive to the demands of the superego and dismissive of the situation imposed on it. keywords: Psychological profile , Post-Traumatic Stress Disorder (PTSD), clinical study.